Facebook users have expressed varied reactions to a post by Asefon Sunday Dayo, the president of the National Association of Nigerian Students (NANS), who took to his Facebook page to share an update, ostensibly on the current strike by the Academic Staff Union of Universities (ASUU). More than four months have passed since government-owned universities have been shut. 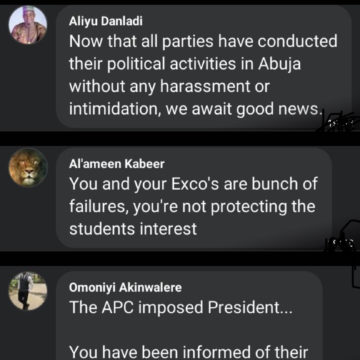 A series of mixed reactions have however followed the post shared by the NANS president.

Some of the aggrieved students who seem not impressed by the NANS president’s efforts in making sure the strike is called off took to the comment section to berate the students’ leader.

Checkout The Best Way To Satisfied Woman On Bed, Like No. 3 Is Very Good
ALSO READ:  We Need A Bigger Mavin Records HQ – Don Jazzy

Commenting on the post, a Facebook user, Al’ameem Kabeer, alleged: “You and your excos are bunch of failures, you are not protecting the students interest”
“Mr president you are a joke. biko shift make we see road. Revolutionary noise maker,” Chukwu Caleb commented.

Another Facebook user, Aliyu Dalandi said, “Now that all parties have conducted their political activities in Abuja without any harassment or intimidation, we await good news.”

ALSO READ:  Wonders About Eating Raw Garlic On An Empty Stomach Every Morning

It will be recalled that ASUU has on February 14 embarked on a one-month warning strike which has subsequently been extended by eight and 12 more weeks.

BIZZARE RITUAL! ! ! This People Allow Cows To Trample On Them In Order To Gain Good Luck And Prosperity